Tribal Sovereignty | An Explanation and Some Resources 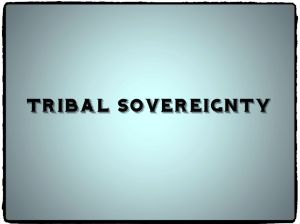 Tribes are treated significantly different than other minority groups because the United States has a legal and political relationship with tribes.

Tribal Sovereignty is a philosophical term that is legally constructed and came about through the treaty relationship, is limited via legislation and court decisions, and applied through the actions of Native nation building and self-determination.

The federal-tribal relationship is both constitutionally based and congressionally based.  Congressional Plenary Power or the idea that Congress has ultimate authority over Indian affairs was defined by a series of three Supreme Court rulings called the Marshall Trilogy (Chickasaw Nation Video on the Marshal Trilogy).  This series of cases defines Congressional Plenary power or the exclusive Federal-Tribal relationship, inherent tribal sovereignty, the Trust Doctrine or the responsibilities of the United States to Tribes, and the Canons of Construction, which defines the role of the courts with regard to tribes.
Tribal sovereignty is further supported by various mandates, including, but not limited to:

The Rights of Indians and Tribes, Stephen L. Pevar