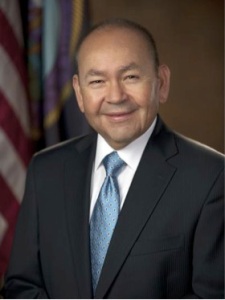 As part of our ongoing series of blog posts highlighting Tribal leaders, we’re starting with the Governor of the Chickasaw Nation, Bill Anoatubby.  The Governor was first elected in 1987, becoming the 30th Governor of the Chickasaw Nation.  He is currently serving his seventh term in office.  As the tribal leader, he manages nearly 13,000 employees, 50 governmental programs, and over 100 tribal businesses, having grown the Nation from 250 employees when he took office. Check out this video history of Governor Anoatubby created by the City of Ada, Oklahoma last year.

Under his leadership, the Chickasaw Nation has grown to become self-sustaining via economic development and business diversification.  The Nation has a 3-branch system and the structure of the government supports infrastructure and businesses to build the tribal economy. Tribal monies provide funding for tribal operations, programs, and services for the Nation.

As of October 2013, overall, the Nation operates 216 tribal programs and 68 federal programs. The Nation has established 6 health facilities, operates Carl Albert Indian Health Services, several diabetes care centers, 4 head starts and 12 senior centers. There are numerous scholarship programs providing 4000 students with $15 million in scholarships, grants and other support and opportunities. There are also youth academies for students.   Additionally, a number of programs have been specially developed for the at-large population or those Chickasaw citizens who live outside of the Chickasaw Nation’s boundaries in Oklahoma. 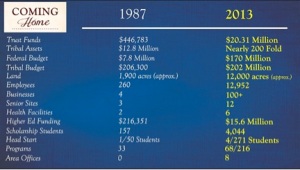 Tags: American Indians, Chickasaw, Chickasaw Nation, Governor Anoatubby, native american
From: Tribal Leader Bios
← Tribal Telecommunications and the Rewrite of the Communications Act
One Chickasaw Citizen’s View on the Passing of the Last Monolingual Speaker of the Chickasaw Language →